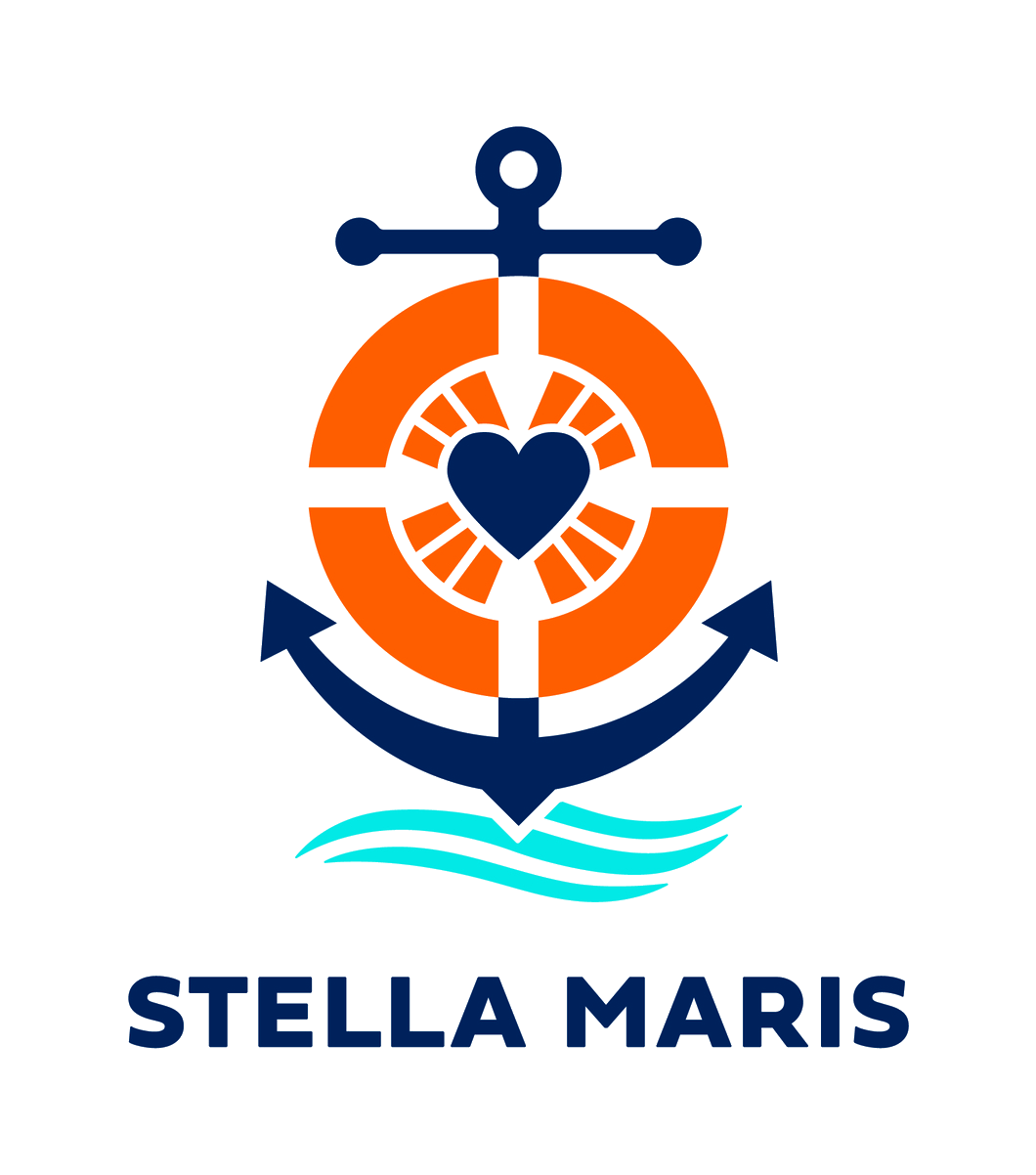 The evolution in shipping never stopped. Stella Maris and the welfare for seamen have followed this evolution. For example, from the early 1950’s until the end of 2020, Stella Maris ran a sailors' hotel at Italiëlei 72/74 in Antwerp with twenty rooms available to sailors who had been signed off in Antwerp or who were staying ashore awaiting new orders.

But the way of recruiting in the seafaring sector evolved completely, making specific seaman's hotels superfluous; so also ‘Hotel Stella Maris’. In the eighties of the last century, the board of directors decided to renovate the hotel rooms and convert them into student accommodation. With the proceeds, the foyer and the welfare of seamen could be maintained at the same location. 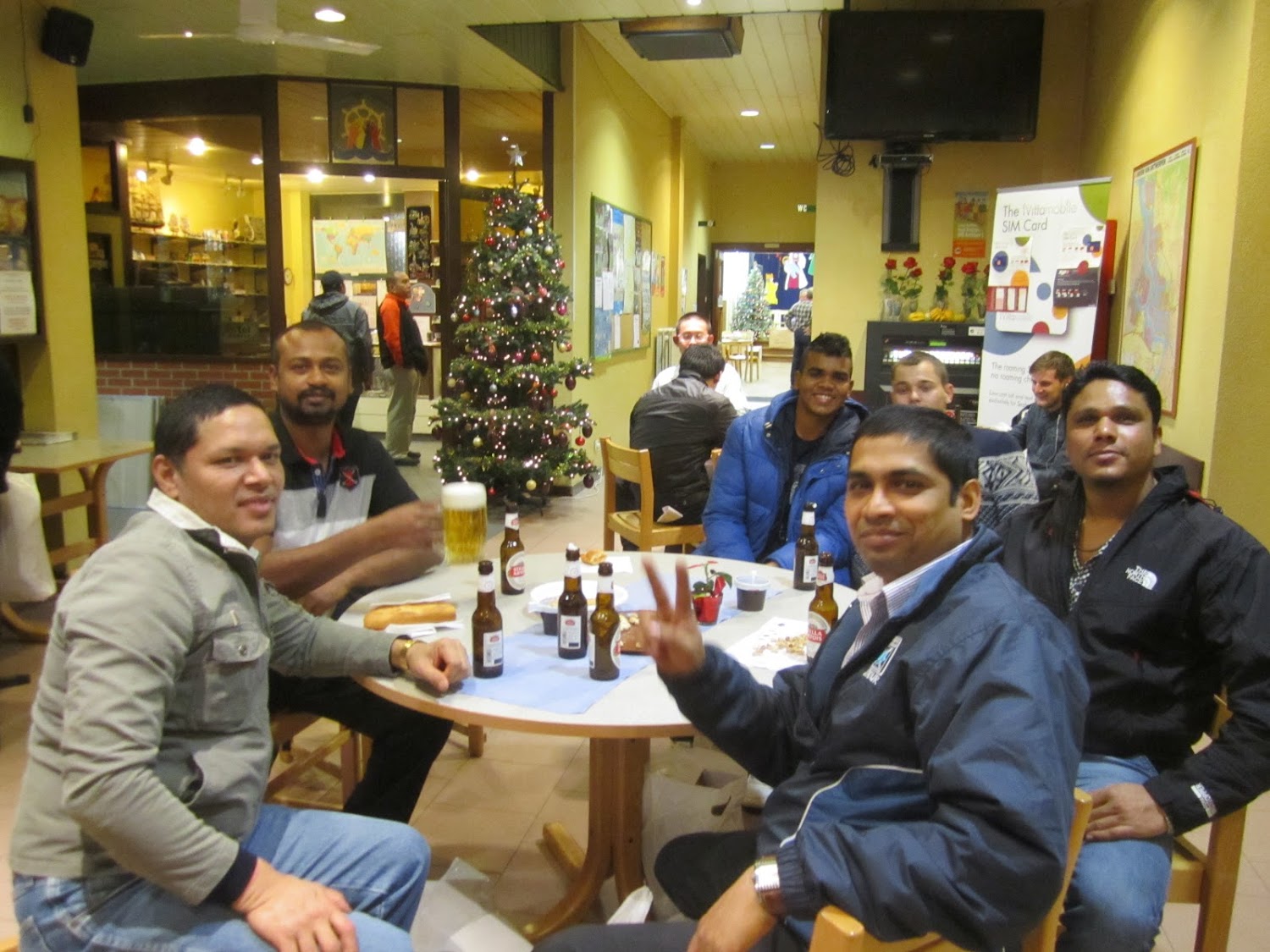 Conviviality among the sailors during their stay in the foyer of the old Stella Maris.

But at the end of 2020 a new evolution started for “the Stella”. After the hotel era, the student home was also gone. The buildings were sold and the non-profit association bought itself into the Antwerp Harbour Hotel on the Noorderlaan, from where, in collaboration with the other sailors' missions, the operation for the benefit of the seamen will be continued.

A piece of maritime history is disappearing in the city but remains present in the port. Stella Maris is an asset for seafarers in almost all ports in the world. In a foreign port city, sailors may not know the town hall, the central station, the cathedral, the football stadium, etc., but they know to find Stella Maris.

Stella Maris at the Italiëlei was also a familiar sight in Antwerp. Since the end of November 2020, the buildings have been vacant. A familiar landmark disappeared from the city landscape. After moving to the Antwerp Harbour hotel at the Noorderlaan Stella Maris continues its activities: welcoming the seamen in the foyer, ship visits, hospital visits, visits to captive seamen.

We also continue our efforts to deliver multilingual books and magazines to the ships. 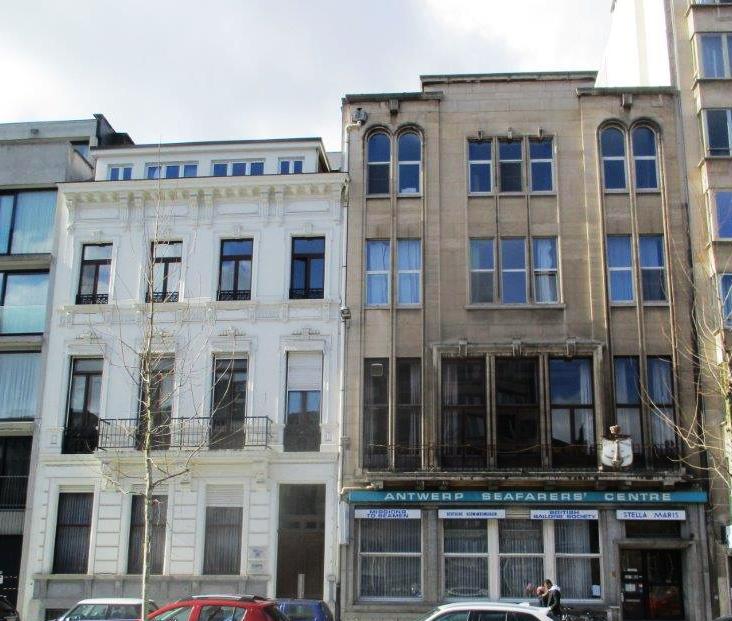 The old buildings on the Italiëlei where Stella Maris had been located for decades.

Without ever having that name, Apostolatus Maris in Antwerp had grown into a preconceived maritime center. Despite its Roman Catholic roots (founded in Glasgow in 1920) it had grown into an oecumenical parish in the 1960s with the active participation of the other sailors’ missions active in the port of Antwerp: the Sailors' Society (protestant), the German Seamen’s Mission (Evangelical) and the Mission to Seafarers (Anglican).

The employees of the International Seamen's House are also involved in this operation. The chaplains with their volunteers divided the harbor into sectors on the right and left banks and visited the ships that dock there.

During a work meeting every Tuesday morning in the foyer at Italiëlei a duty list was set up for the reception of the sailors; every evening from 7 pm to 11 pm. Around 900 to 1.300 sailors arrived monthly at the Seamen Centre with busses provided by the Port Authority.

Over the years several organisations related to seafarers and the port have chosen the premises  of Stella Maris as their home base.

For example, the Royal Belgian Seamen's College was domiciled at Stella Maris since its opening in 1951. Until its dissolution in 2004, the secretariat of the ‘Verbroedering der Belgisch Zeelieden ter Koopvaardij’ (veterans-sea warriors) was also located there. After that, the Secretariat of the Day of the Sailors, which organizes the annual tribute to the fallen sea warriors, was also established in the building. The non-profit organisation Belgian Ships' Archives found shelter in the cellars of number 72 in anticipation of a durable housing. EMPA (European Maritime Pilots Association) rented the first floor of number 74 until it moved to Brussels; place that was subsequently taken by the ‘Professional Association of the Maritime Pilots’ and the ‘Pilot Sports Association’. The rear building was then rented to the Swedish welfare. The former hotel rooms were occupied by students of the Maritime Academy.

The first seamen's home of Catholic origin in Antwerp was founded in the 1930’s by Father Scheutist Kruynen, who took care of the Congolese sailors, sailing on Belgian ships and more specifically on the Congo boats. Due to the concerns of the shipping company, Kruynen had been given a house at Van Dyckkaai 1. It was named “Ndaka ya Bissu” or ‘Ons Huis’. Sailors found there shelter when their ship was in dry dock in the harbor for repairs, during derating etc. It was to become the precursor of Stella Maris in Antwerp. However, the good relationship with his sponsor did not last. Because Kruynen was also concerned about the working conditions on board the ships, he came into conflict with the shipping company's personnel department. And officers felt that Chaplain Kruynen was too familiar with the blacks, which undermined the authority on board. Conclusion: exit Ndaka ya Bissu!

The seamen's house Stella Maris at Italiëlei 72 was founded in the late 1940’s and inaugurated on June 30, 1951. It was financed by sponsorship from the shipping companies supplemented with subsidies from the city and province. It was conceived as a sailor's hotel with 25 single rooms, a party room, the ‘Koopvaardijzaal’, a restaurant on the first floor and a professional kitchen in the basement. It was the period when the ships in Antwerp still changed crews and between signing on and on they stayed in the seamen's house of Stella Maris.

The ‘Koopvaardijzaal’ in the former premises of Stella Maris

But it soon became apparent that the hotel capacity was too limited and there was no room for a resident chaplain either. When property number 74 came up for sale, it was also acquired with the help of CMB and both properties were connected. Guest rooms were added and a chapel was installed in the former owner's drawing room, a very spacious room with paneling and silk wallpaper.

The chapel in the former premises of Stella Maris

In 1952, the Amicale des Marins Congolais moved into the cellar. It was the period when many Congolese served on Belgian ships, mainly on the Congoline. The bartender-chaplain was a former missionary from Matadi who, unfortunately, did not always managed to keep the Congolese parties and after-parties under control, resulting in noise nuisance and neighbours protests.  Conclusion; in the early eighties : exit Amicale

In those years, first at the Italiëlei on the other side and then at the Olijftakstraat, the Recruitment Office for Seamen (the “Rattenkot”), the Pool of the Seamen and the Auxiliary and Precautionary Fund were established; All institutions with a strong presence of seamen. They crossed the Italiëlei before and after their administrative duties to celebrate a new appointment at the bar of Stella Maris or to make use of an advance payment just received. The seamen's club was then also continuously open.

After the flagging out of the Belgian fleet, ratings, were from mainly recruited by manning agencies. The “Rattenkot”, the Pool of the Seamen and the Auxiliary and Precautionary Fund disappeared. Apostolatus Maris was obliged to close during the day. The restaurant also closed as well as the kitchen. Also less crew changes, so that rooms became redundant and the entire hotel function was phased out.

After several years of vacancy, some administrators, in the early 2000’s, took up the plan to re-use the rooms and rent them out as student rooms for the Maritime Academy. The first tenants were the apprentice officers of the Navy who participated in the renovation of the accommodation through the rent. The former restaurant became a day centre for the Navy students. For the students ‘deck and machine’ of the Merchant Navy, communal livings and equipped kitchenettes were set up on the second and third floors.

The first floor in building 74 was rented out to EMPA, the Professional Association of Maritime Pilots and to the secretariat ‘Dag der Zeelieden’ ( Day of Seafarers) , while the non-profit organisation Belgian Ships' Archives settled in the basement. The former library was set up as a meeting room and was rented out to associations; often associated with the maritime sector. This also applies to the Koopvaardijzaal, where, neighbouring parish organisations held their weekly meetings. The missions also organized their annual Christmas Bazar in the ‘Koopvaardijzaal’. That was also the setting for the annual Christmas and Easter celebrations.

The highlight of the ‘Koopvaardijzaal’ were of course the dance evenings in the 1970’s, for which countless dancing volunteers showed up and acted as dance partners for the visiting sailors. Many young Belgian officers found their life companion on those occasions.

The decline of the Antwerp seamen's house is not unique in the world of welfare for seamen. Stella Maris Rotterdam for example discontinued its activities in the mid-eighties. The financial costs became too heavy and the building was sold. However, the property still exists and is called now ‘Maritiem Hotel’.

Also for financial reasons Stella Maris closed its doors in Hamburg in 2004. The activities of Stella Maris in both Rotterdam and Hamburg, are now mainly limited to ship visits.

The German seamen's houses of the Protestant Deutsche Seemannsmission (DSM) are still open and active in Hamburg, Bremerhaven and Emden. They even offer overnight accommodation, but no longer have a reception area or foyer.

In the ports of Hamburg (2 seaman's houses), Bremerhaven and Emden, the DSM is still open and active. But in Bremen, DSM's sailor hotel was closed in 2019. Ship visits will be maintained.

In the UK ports there are no longer large sailors' houses with the exception however of London. In all smaller ports there are still seaman's clubs and ship visits are organised in oecumenical co-operation with the different churches.

The cause for this decline is closely related to the evolution in maritime shipping : limited crews on board the ships, increasingly shorter port stays and subsequent shorter shore leave. 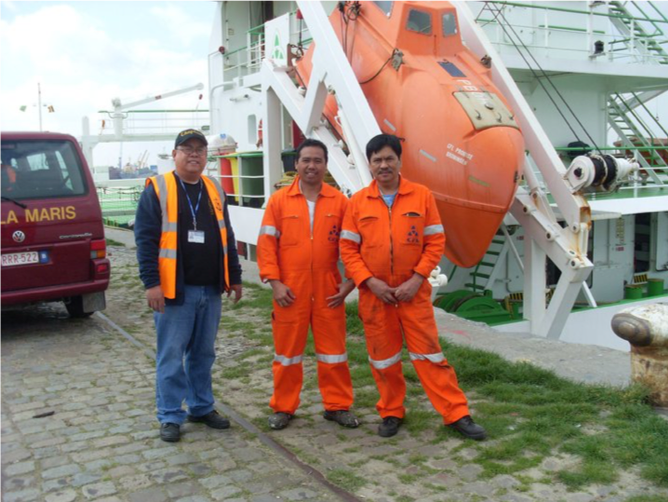 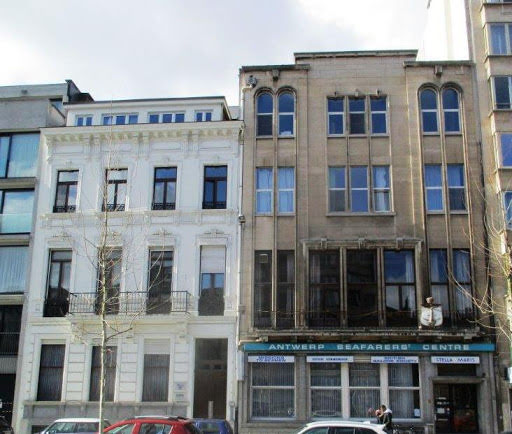